I started my career as a conservationist in the Pantanal, Brazil. I remember the first thing I heard was that the local fish population was decimated. Some people even called the Paraguay River an empty river. The widespread belief was that the river had been devastated and that it was an area where local people impetuously harvested everything.  As an early career biologist out to save the world, I was easily convinced by the passion behind this crisis portrayal.

It was not only me who was convinced about overfishing in the Pantanal. The idea spread all over the region and policy makers started to set out enforcement measures to protect the fish by any means necessary. The first order was to limit local fisher’s gear to line and hook only. Next, they reduced people’s fishing quota. Finally, they increased the minimal size of fish that could be taken. For a while I supported these measures, believing them to be in the best interests of the Pantanal ecosystem. However, after a few years working in the region I began to understand better this ecosystem, the people, and most importantly the fish. I started to doubt the alleged overfishing and realised this idea of overfishing was being largely spread by sport fishing tourist companies who had seen drops in the number of people coming to the Pantanal (from ~50,000 in the 1990s to 10,000 in the 2010s). The case these companies were making was that tourists were not coming anymore because there was no fish, and that there were no fish because of overfishing by local fishermen. However, at this stage I couldn’t disprove what the tourist companies were saying. There was no study showing the contrary.  At the time, we did not know the power of ‘fake news’. 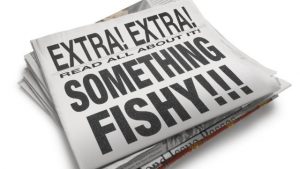 ‘Fake news’ is one of the trendiest terms in the world. Due to the US election, Brexit, and some more local political clashes, fake news and news about fake news has dominated the media. Some even call it the post-truth era. I’m suggest that conservation is no different. Fake news is an increasing phenomenon and it is present everywhere. Many claims that local people are destroying the environment are based on no facts (For example desertification caused by pastoralists or overfishing in the Zambezi). In other words, fake news.

This month I published a new paper in the journal Conservation and Society showing that the claimed overfishing in the Pantanal, is, in fact, “fake news”, or what some might call “an environmental narrative”. First the paper deconstructs the claimed overfishing caused by local people in the Pantanal. I used multidimensional regression to show that the drop in tourist numbers are only explained by policy changes. In other words, when the government started to force local people to stop fishing, they extended some enforcement measures to tourists. Therefore, visitors equally faced an increase in the minimum fish size they could capture and the fish quota they could take home. Every time the government restricted tourist fishing power, less people came to the Pantanal.

Revising all studies in the region I showed that there is no scientific evidence of overfishing in the Pantanal. The few studies in the region show no sign of depletion. Moreover, during the study I was able to uncover a suite of mechanisms by which local fishermen manage resources sustainably. Fishers continually check whether new spots are worth fishing. The system works in the following way: a group of fishermen go to a fishing site while a few others try new areas. If someone finds a better place, s/he informs the others, and everyone moves there. This is constantly repeated during the fishing season. Throughout the year, this moving process creates a Rotational Fishing System.

Information about good fishing locations is shared during several ice tea drinking sessions held each day (“tereré”). People tend to not hide such information, establishing a sense of reciprocity. However, the openness showed by members towards co-residents does not extend to outsiders. Fishers were very clear about boundaries that groups from other settlements need to respect. There is a sense of territory.

Finally, changes in connectivity between areas, through river channel changes or floating vegetation blocking off passages, are factored into people’s livelihood adaptations. Every year a set of bays and lakes are available to be used by fishers. The simple closing of bays and river channel entrances by floating vegetation mats can turn water bodies into naturally unexploitable refuges for aquatic species. Local fishermen’s adaptive strategies of reciprocity and territoriality alongside this shifts biophysical restrictions in this dynamic ecosystem is likely to create a sustainable use of natural resource. Very different from what was portrayed by policy makers and tourist companies.

It is unlikely that policymakers or owners of tourist companies in the Pantanal will read my paper and every time I return I will hear the same story of overfishing. Only this time we have scientific evidence to call out fake news in the Pantanal. Most of this information has been delivered to local NGOs and prosecutors, and some supportive measures for local people have now been put into practice. However, we still have a long way to go. The challenge is only just starting, and everyone is welcome join!

You can see Rafa’s paper in Conservation and Society here

2 thoughts on “Fake news in conservation: Overfishing or over-reacting?”