Forest elephants are found to occupy timber concession forests in Cameroon within areas currently deemed ‘unlikely’ by IUCN, according to a scientific study published in Oryx —The International Journal of Conservation  In Cameroon, forests provide the wood needed to build homes and cook food, as well as a multitude of non-timber forest products upon which local people depend. Aside from the domestic uses, the forestry industry in Cameroon generates an annual export worth of $707 million, vital for the country’s economy. These same forests also provide important habitat for numerous endangered species of global importance, including the forest elephant. 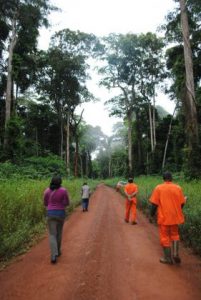 Forest elephants are increasingly threatened. As human populations grow, and industrial logging and mining spreads, roads and settlements are encroaching deeper into the forest. New timber concessions give improved access to once remote forested areas, which can lead to increased elephant poaching and provide routes for the transport of ivory and meat. In Cameroon, 80% of the eastern region’s forest is allocated as timber concession, yet the south-east of this region also represents a stronghold for the forest elephant and is recognized as a priority area for conservation.

Due to the challenges of surveying rare species in forest habitats, the scale of the forest elephant decline has been difficult to quantify and CITES-MIKE acknowledged that elephant population estimates in the Congo Basin are based on ‘guesswork’. The IUCN 2007 African Elephant Status Report records a definite population of only 179 African elephants for Cameroon, but less than half of the potential Cameroonian range has been assessed, and the true population could be up to around 16,000. Addressing this uncertainty is vital to the conservation of the species and is the motivation for conducting this research. 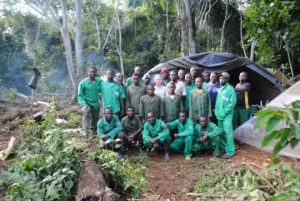 In light of the challenges posed to monitoring in forest habitats, interviews are being increasingly used to collect data from people who live or work in forests and who are, therefore, likely to encounter the target species during their day-to-day lives.

The results of the study reveal that forest elephants are inhabiting timber concession forest in areas deemed ‘unlikely’ by IUCN, suggesting that timber concessions may provide valuable additional conservation land, especially when adjacent to protected areas.  However, the relative species abundance has declined by 40% between 2008 and 2013, in line with the growing perceived threats to elephants from poaching driven by intensifying international demand.

The study also found that interview-based occupancy analysis is a reliable and cost-effective method for the rapid assessment of forest elephant occupancy, as a complement to, or first stage in, a monitoring process. However, more research is needed to further explore the strengths and limitations of this method, which now forms the focus of Stephanie Brittain’s PhD project.